I LOVE ice cream. My grandmother loved it, my dad loved it, and apparently, I’ve inherited their ice cream genes. Peppermint, coconut, peanut butter chocolate…give me all of the ice cream. All of it. I could literally eat it every day, and I pretty much do. As much as I eat a healthy diet overall, there’s still room for some dessert, and I wouldn’t have it any other way.

Recently though, a new line of ‘healthy’, high protein, low sugar, low calorie ice cream brands has emerged. What? Can ice cream actually be healthy? Halo Top, Breyers Delights, Cool Way, and Arctic Zero are a few of the brands you might find at your store.

My true story, ice cream in the rental car, experience:

When I first heard about Halo Top about three years ago, I absolutely needed to do some field research (heh heh). I was fascinated with the stellar reviews from people that said it was delicious and just like regular ice cream. There was also the ‘eat the whole pint’ thing. I read that an entire pint of this stuff clocked in at 300-400 calories, far less than regular ice cream. The fact that this ‘healthy’ ice cream was good enough that people even wanted to eat the whole pint made me extra excited to give it a try.

We didn’t have Halo Top (or any similar ice creams) in Canada yet, so I searched it out as soon as I was in the States next. I managed to locate a pint of Halo Top strawberry in Menlo Park, California. Strawberry was never one of my favorite flavours, but whatever. It was going down.

Sitting in my rental car (I wanted to get to the goods before they melted), I dove in. Peeling the pretty gold seal off the pint, I noticed that it had some sort of ‘eat the whole pint, it’s healthy!’ messaging on it. The packaging as a whole was festive and looked premium; Even before I tasted it, I think the packaging subconsciously half-convinced me that the product was not going to be the typical shitty ‘healthier’ ice cream alternative. This wasn’t going to be your 90’s-style fro-yo. 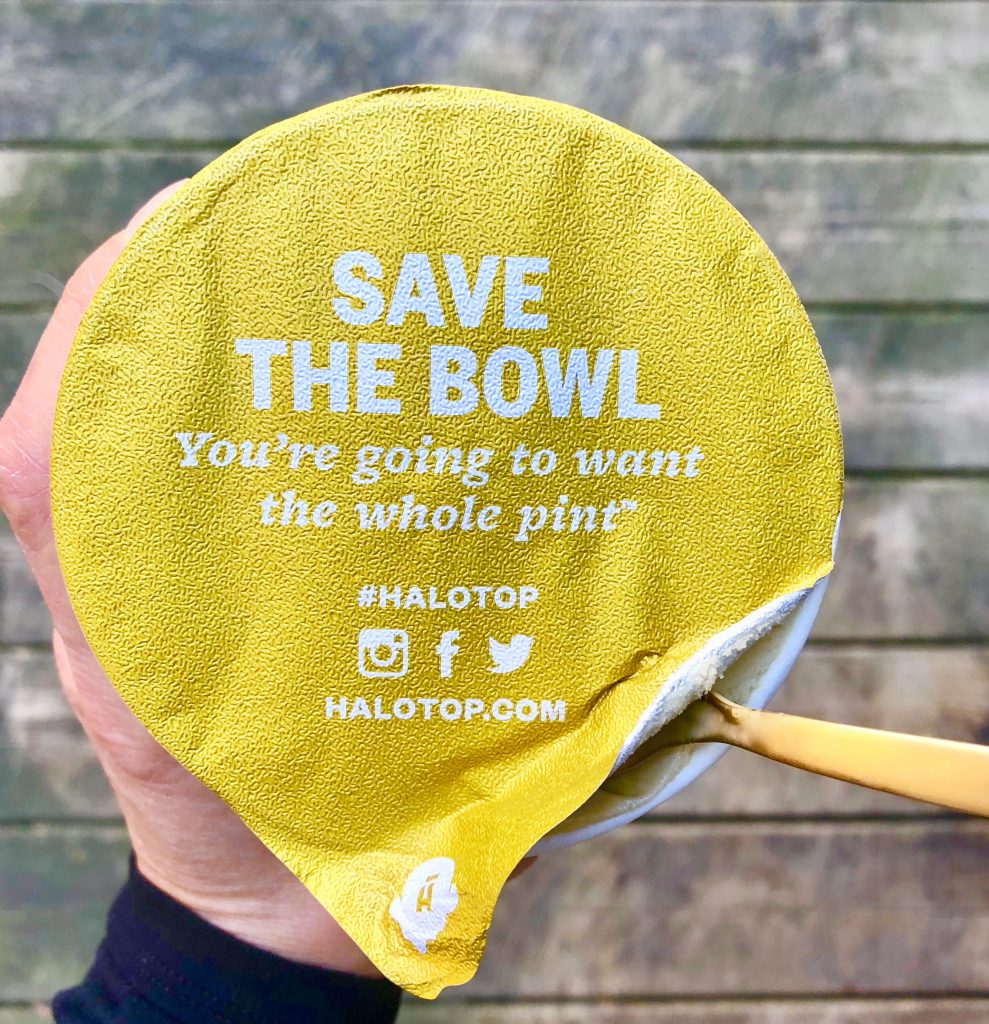 I spooned up the ice cream. It was surprisingly creamy and tasty, and suddenly, I was looking at the bottom of the container. Having never eaten an entire pint of anything except for strawberries, I was shocked. What just happened? Had I just been suckered into the ‘eat the whole pint’ mentality? I wasn’t particularly hungry. It wasn’t exceptionally delicious (although I must admit that it was really good and super easy to eat). Yet, I dug down. Was it because of the little gold seal telling me to eat the entire thing? Was it because I subconsciously felt that this ice cream was ‘healthy’ and a pint of it would somehow ‘count less’ than a pint of regular ice cream? What was in this stuff, anyhow? 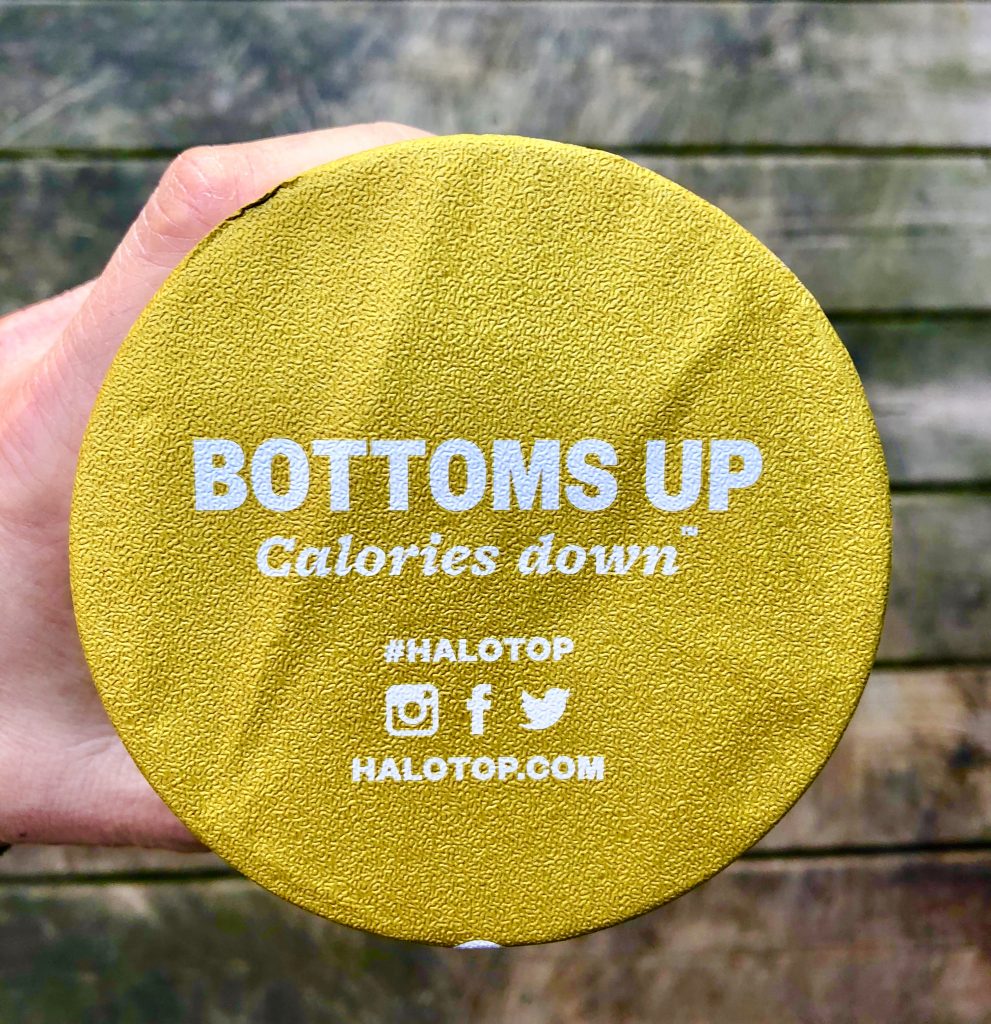 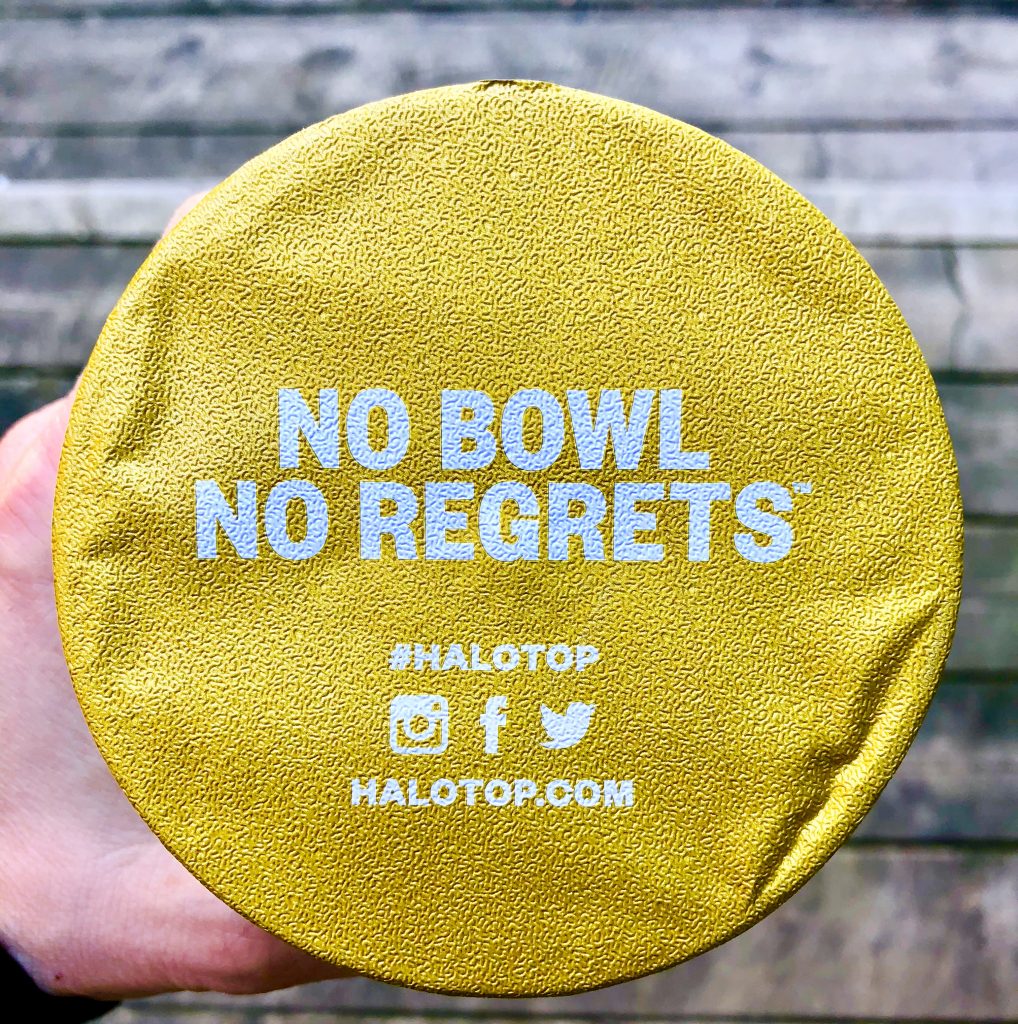 Let’s face it: Even if it’s marketed as ‘healthy’, ice cream isn’t exactly a health food. It’s still pretty nutritionally void, even when, like these ones, it’s fortified with protein and has less sugar. And overall, consuming an entire pint of even the least caloric flavour sets you back over 300 essentially non-nutritive calories.

Predictably, there are a few different sweeteners in this product. Erythritol, a sugar alcohol, plus stevia and ‘ organic cane sugar’ aka regular sugar that maybe sounds healthier but isn’t. Other ingredients seem the same as regular ice creams: Cream, milk, eggs, gums to stabilize it, flavourings. Milk protein and probiotic fiber are additions that aren’t usually seen in other ice creams, but all in all? Pretty legit. I don’t see anything in there that I wouldn’t eat.

Compared to conventional ice cream, carbs, fat, and calories are slashed; protein is higher, but not actually by a lot. In fact, even though some of these ‘healthy’ ice creams are advertised as being a ‘good source of protein’, 1-2 grams more per serving than the average regular ice cream isn’t exactly groundbreaking. Maybe if you eat the entire pint, but that’s a whole other thing.

While I generally recommend that people consider quality over calories when making food choices, it’s normal to sometimes want ice cream without the premium calorie and sugar content. I get that. So if that’s your reason for choosing Halo Top or a similar product, you won’t be disappointed. One thing though: I don’t think it’s healthy to eat the entire pint just because it’s ‘healthy’.

Now that we have this sort of ice cream in Canada, I headed to the grocery store and bought a bunch. The messaging that appeared on the golden seals that protected the product I bought was focused on convincing people to eat the entire pint:

‘Guilt-free zone – keep digging’; ‘Save the bowl, you’re gonna want the whole pint’; ‘No bowl, no regrets’, ‘Stop when you hit the bottom’, ‘Bottoms up, calories down’.

You can easily get a sense of the way messaging like this gives us ‘permission’ to override our natural hunger and fullness cues. Just like when I sat in the car in Menlo Park with my strawberry Halo Top, there’s something that happens with our shut-off switch when we are bombarded with multiple messages to overindulge: ‘guilt-free!’ ’healthy!’ ‘good source of protein!’ ‘eat the whole pint!’ ‘only 300 calories compared to 450!’ Foods with health halos seem to cause some sort of subconscious (and completely invalid) comparison like, ‘if this was REAL ice cream, I’d be up to 500 calories by now, but now I’m only at 300…I can eat MORE!’. Know what I mean?

It’s sort of like going to a sale and buying stuff you don’t need just because it’s on sale.

Another thing about the messaging? That ‘guilt-free’claim. Are you guilty if you eat regular ice cream, then? Is that something shameful and wrong? I wish the guilt-free label – not only on this ice cream, but everywhere in the world, because it’s so pervasive – would just go away now. It’s so gross. Guilt and food aren’t a healthy mix, ever.

By its very nature and definition, ice cream isn’t ‘healthy’, it’s dessert. By labelling it as ‘healthy’, it establishes a permissiveness that makes us more comfortable eating more of it.  Research suggests that people naturally will eat more of foods they perceive as being healthy (and here). I’m not surprised: I’ve seen it with myself, and I’ve seen it with clients. And adding protein to any food: granola bars, water, ice cream, cereal – doesn’t make it healthy either. Even if the label says ‘a good source of protein’, you’re not eating ice cream for the protein, are you? Nope, nope, nope. Please don’t. No one needs more protein that badly.

It’s completely normal to overeat from time to time. I’m just not into messaging that encourages and normalizes it.

Be aware that subconsciously or not, ‘eat the whole container’ messaging or labels that say that a food is ‘healthy’ or ‘guilt free’, can affect how much of it that you eat, possibly overriding your hunger and fullness cues. In many instances, you’ll probably eat more of it than you would a normal version of the same food.

Eat ice cream. Eat the one you love, whichever one that is – enjoy it without guilt, listen to your hunger and fullness cues, and stop when you’re full.

No matter what the packaging says.