I think homemade gifts are some of the best things you can give and receive. I mean, you can tell that someone put time and love into making something with their hands, so these gifts, at least to me, are really special. 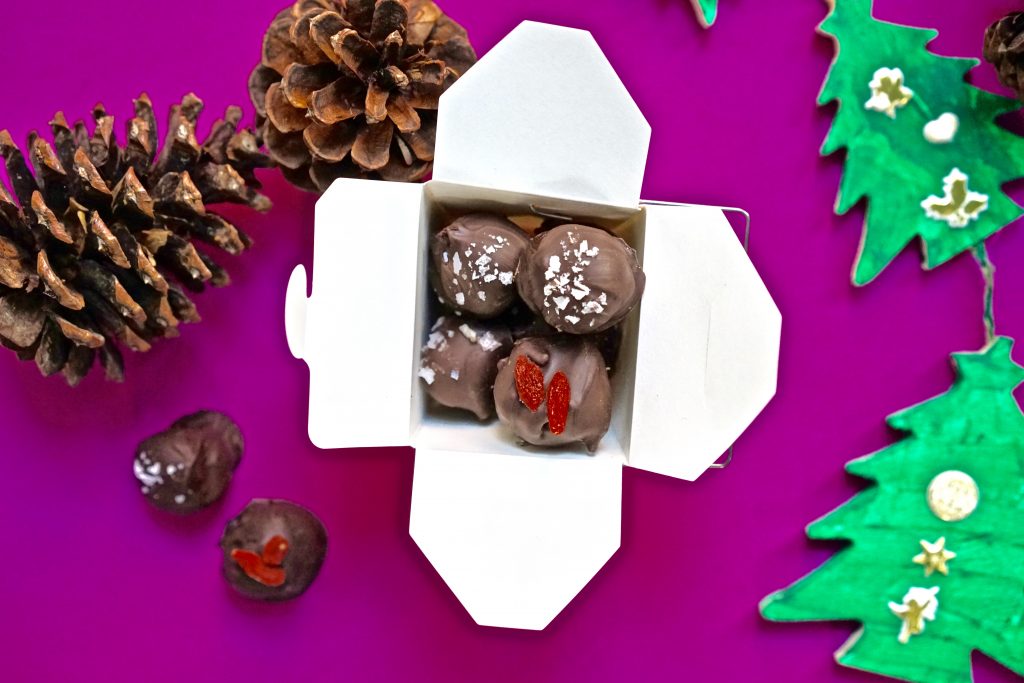 A lot of people might not know that vegan sweets can be just as scrumptious as non-vegan ones. I’m not vegan, but as you have maybe noticed from my recipes, I’ve been cooking – and eating – a lot more plant-based foods than ever before. I just feel better doing it, and honestly I’m fitter than ever.

I’m not going to tell you that these vegan caramels are sooo much healthier than regular ones, but they do have some redeeming qualities over their regular counterparts: the caramel is made entirely from dates, coconut oil, and coconut milk instead of butter and cream. The outsides of the caramels are covered in, well, vegan chocolate, so that’s not exactly ‘healthier’ than normal chocolate. But whatever! These are totally delish. Actually I made them three times to perfect the recipe and I ended up eating an embarrassing amount of them from each version. I sort of never want to see them again, although in a few days I’ll probably want more.

As I mentioned before, a lot of vegan caramels are made using only dates. I did that at first, but I wasn’t getting that smooth, unctuous (best word ever) texture that I expect in a caramel. 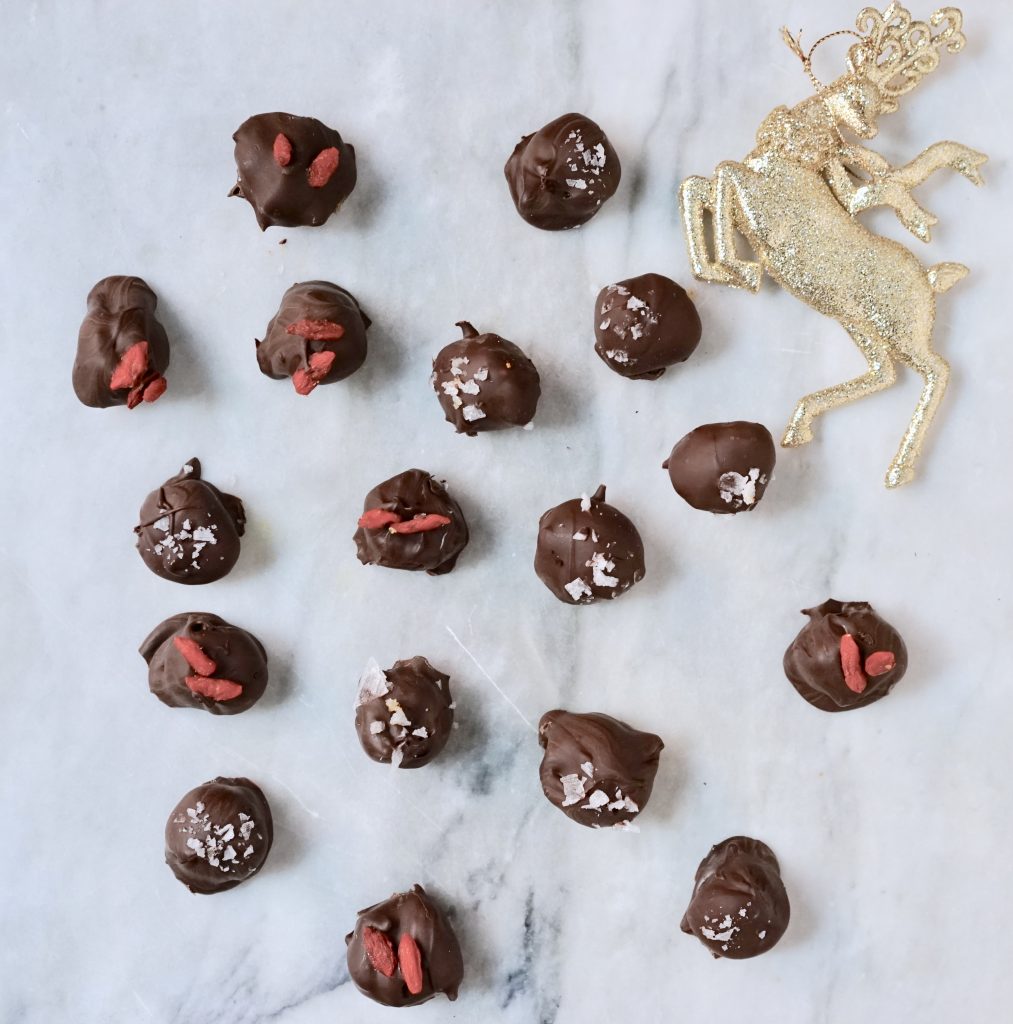 I wasn’t interested at all in making these into a compromise just because I couldn’t use butter and cream, so I did what I thought would make the texture great: I added fat.

The coconut oil in the filling makes all the difference. It smoothes it out and adds the mouthfeel of actual caramel.

Coating caramels (or any chocolate at all) is no easy task, which is why mine sort of look weird. That’s okay; homemade is homemade: no machine made these! They might be lopsided, or have a ‘foot’ on the bottom where the chocolate ran down and set. 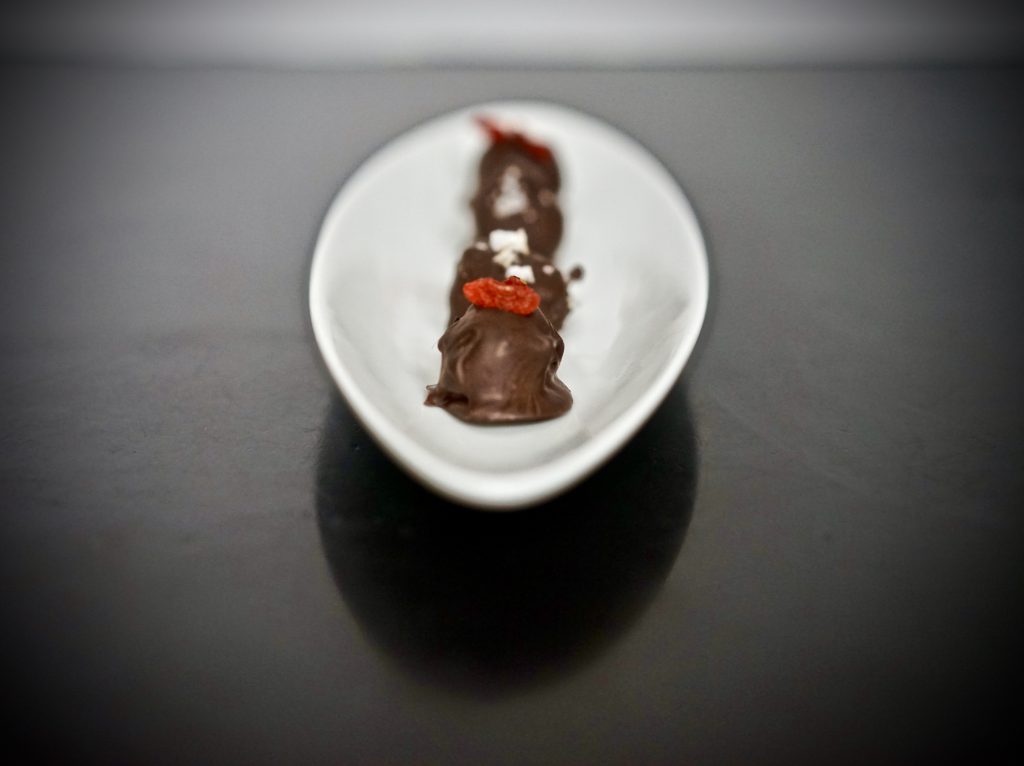 To ensure that the chocolate was smooth and runny, I added coconut oil to it while melting it. Make sure though that you don’t melt the chocolate too fast and at too high a heat, or it will break – and be totally grainy. And never, ever, ever put water anywhere near melted chocolate, or the chocolate will seize. I don’t mean to scare you, but chocolate is a bit temperamental, and I wouldn’t want your recipe to be ruined because you blast the chocolate with heat or splash water into it by accident. 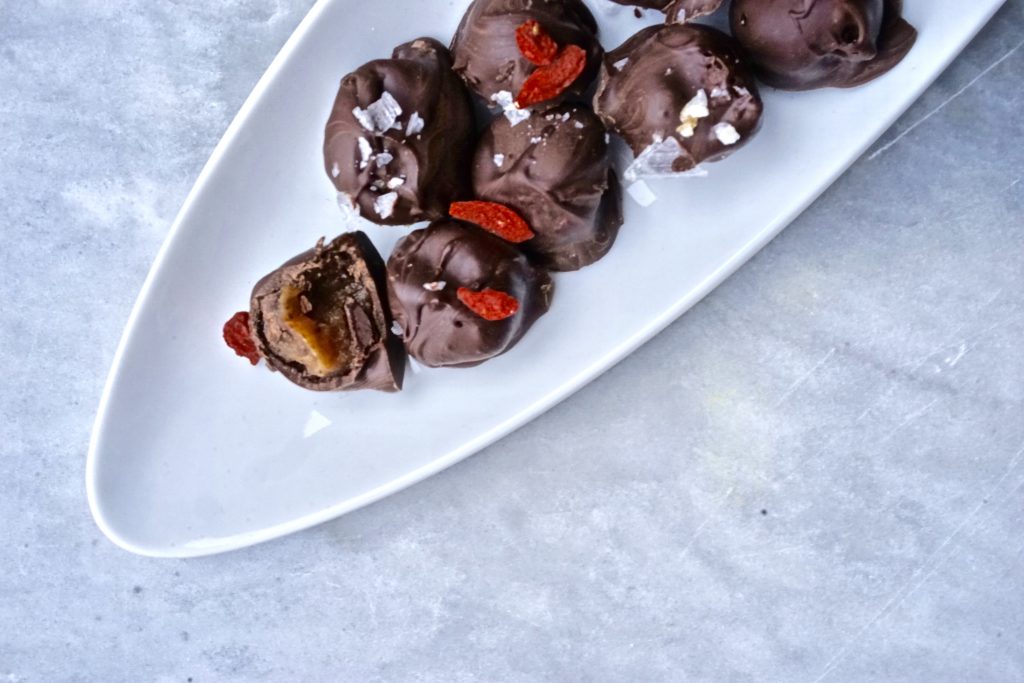 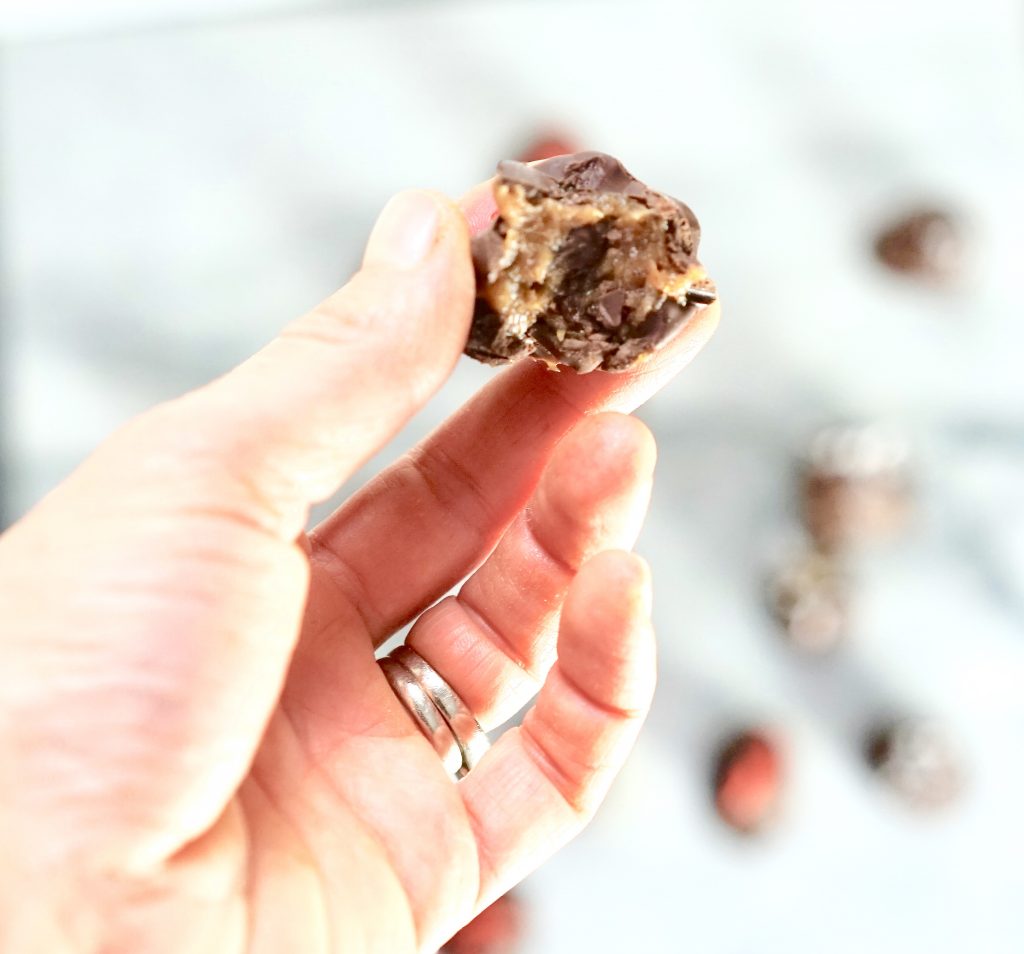 Sorry the photos in this post are so crap. The weather was terrible and the lighting was horrible, even with a light meant for photographing. I’m not lying when I tell you I took about 20 photos of the inside of the caramels but hated all of them. I was like, ‘I can’t publish this recipe without a photo of what people want to see the most: the inside of the stupid chocolates!!’

So there you have it, not my usual quality images. Very frustrating. Just had to get that out there.

If the dates you’re using aren’t soft, you’ll want to soak them in hot water for around 10-15 minutes, until they soften and plump up.

Put the dates into a high speed blender or food processor, adding a small (1/4 cup or so) amount of water. Blend until almost smooth. If you need more water, add it, but use only as much as you need.

Add the melted coconut oil and the vanilla to the dates, and blend until totally smooth. You might need to scrape down the sides of the blender; just keep doing it until you get a completely smooth product.

Transfer the date caramel into a bowl and refrigerate for at least 1-2 hours, until completely chilled.

Melt the chocolate chips together with the coconut oil – you can do this in a bowl over simmering water or in the microwave – as long as you don’t do it too quickly (as above).

Have a wet cloth and all of your ingredients set up in your workspace before you start.

First, chill the caramel so you can work with it. This will take at least an hour or two. Then remove ½ the caramel from the fridge and leave the other ½ to chill more. You’re going to do this in batches, otherwise you’ll probably have to stop half way if you take too long, and chill the caramel again.

Wet your hands (yes, I know – water and chocolate!) and dry them just a bit until they’re still damp.

Take a bit of caramel into your hands and quickly roll it into a ball. Drop it into the chocolate and using one of the forks, roll it around until it’s coated.

Repeat until all the caramel is done.

Chill the chocolates in the fridge until hardened.

Don’t eat them all. 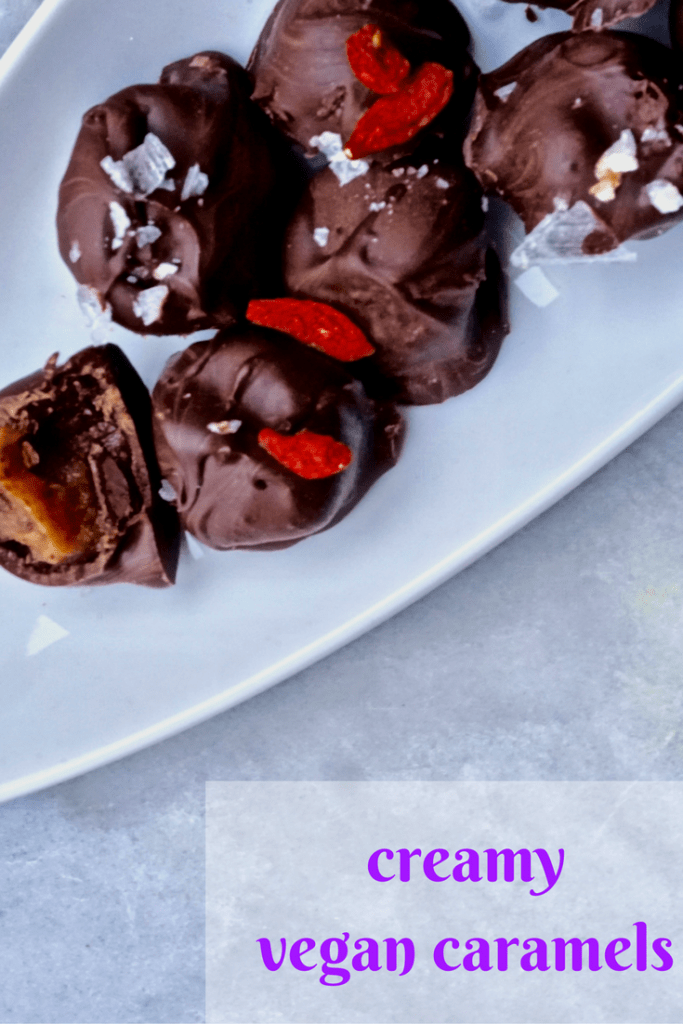