I can imagine that some of you look at artichokes and think, ‘I’d like to eat that, but I can’t figure out how the heck to even cook it, never mind what part of it I should be eating!’

Artichokes look tough to handle, but they’re actually really easy to prepare and versatile! If you’ve never had a fresh artichoke, now’s the time to break the ice with this beautiful vegetable (that’s actually the bud of a flower).

To pick a good artichoke, look for ones that have tightly packed leaves and healthy green color, and a fresh appearance. You don’t want an old, dehydrated artichoke!

There are two types of artichokes that we see here in North America; the globe artichoke, which is the large one, and baby artichokes, which are fully-grown but around the size of a golf ball. Baby artichokes can be trimmed and eaten whole, which is what I did for this recipe. 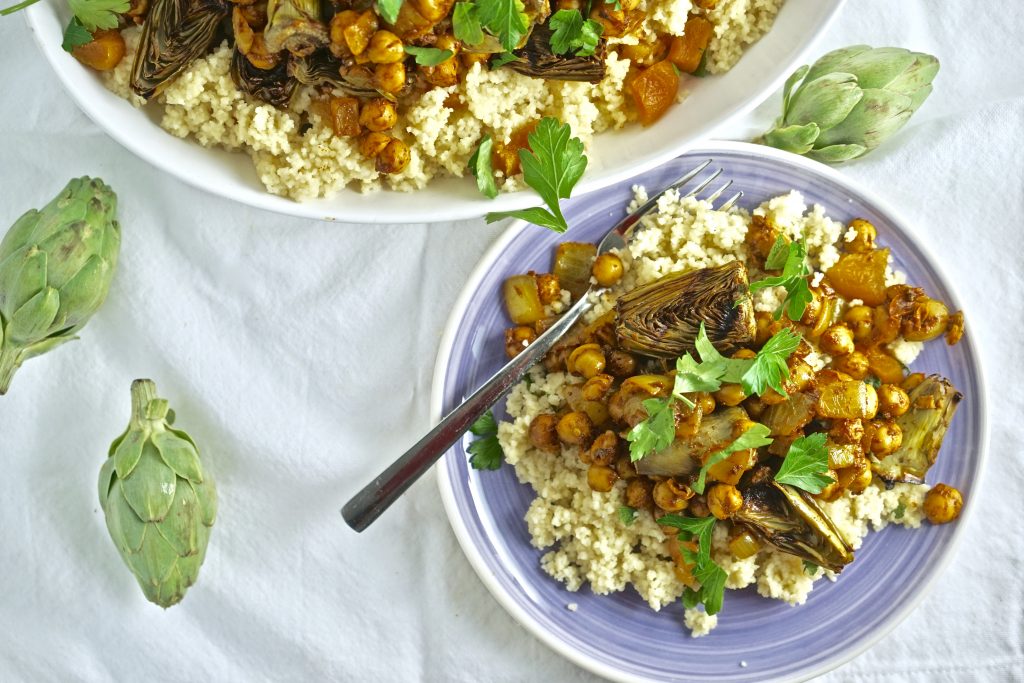 Artichokes need to be prepared before you cook them, and you can see how to do that here.

Nutrition-wise, artichokes are a powerhouse! They actually contain 4 grams of protein per artichoke (the globe ones), and they’re a source of antioxidants and fiber – including prebiotic fiber that feeds your good gut bacteria. Score! Artichokes are also sources of vitamin C, folate, and magnesium

I developed this vegan tagine recipe as an entry to a contest (wish me luck!), and it turned out so well that even my mom, who is the harshest critic of all, was speechless. I’m serious, she gobbled down the entire plate. I then brought it to my brother and his girlfriend, who devoured the ENTIRE rest of the recipe. That is a LOT of tagine we’re talking about. Needless to say, I know you’ll love this recipe as much as we all did. 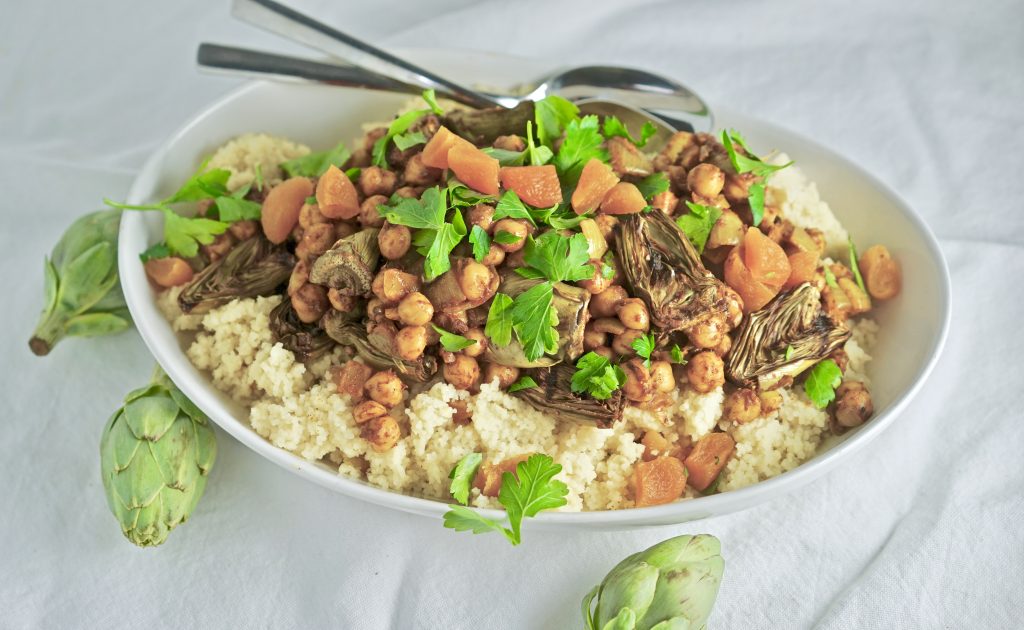 After you grill the artichokes, the entire thing comes together really fast. It’s basically a one-pan meal if you exclude the grill and the couscous.

Don’t let the grilling step scare you, okay? And one more thing: don’t leave the artichokes on the grill for too long. They’re really delicate and need only about 5-6 minutes to cook! No burned artichokes allowed! 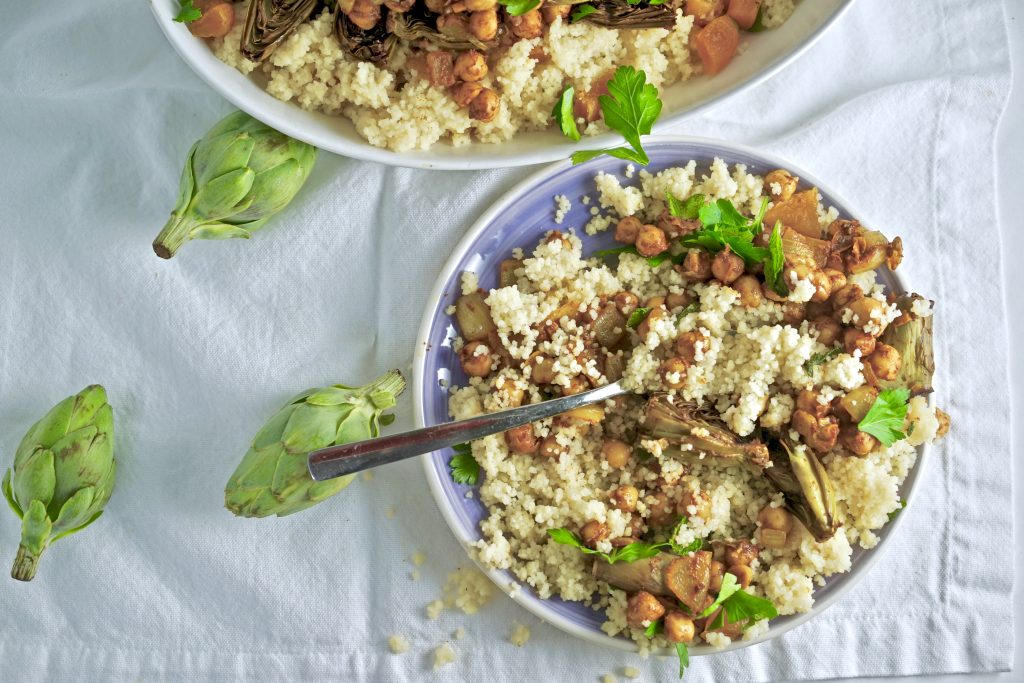 Preserved lemons can be found in most major supermarkets and Trader Joes for all you lucky Americans (we don’t have TJ’s in Canada, boooo). Remember that before you cook with preserved lemon, you need to rinse it and remove the centre. You’re only using the rind.

FYI: for some reason, WordPress is making the photos on this post very dull. To enjoy the photos in their true brightness, just click on them to expand them. That seems to work. Abby

This Moroccan-style dish is the perfect combination of sweet and savoury! 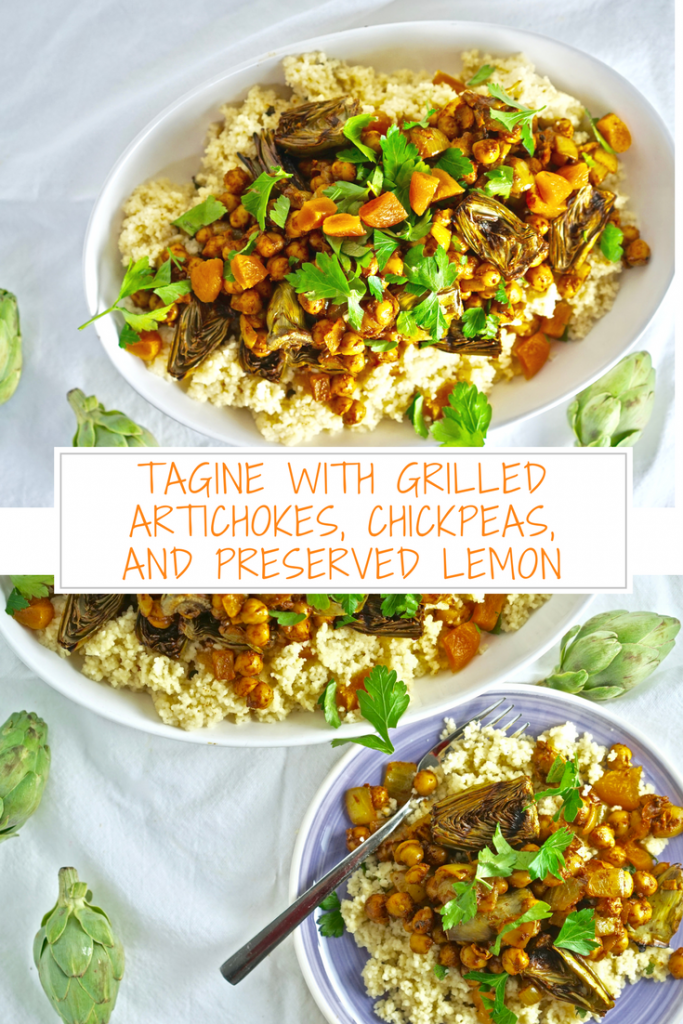