Intermittent Fasting: Should You Try It?

Intermittent Fasting: Should You Try It?

I reviewed intermittent fasting a while back, admittedly, I didn’t have many good things to say about my 5:2 experience.

Before we get started, I want to put one thing on the table. Intermittent fasting, like any diet, works because it cuts calories. It hasn’t been shown to be superior for weight loss than any regular lower-calorie diet. In other words, there is nothing magical about fasting in terms of weight loss; weight loss happens when you take in fewer calories. No matter which diet claims it ‘burns fat’ faster, they all operate the same way.

What Is Intermittent Fasting?

Most intermittent fasting is time-restricted feeding, usually 8:16. That means you’re eating during 8 hours of the day, and the remaining 16 hours (some of which you’re probably sleeping through) are spent not eating.

For example, if you’re doing an 8:16 plan, you might start eating at noon, and stop at 8pm. For those of you who normally skip breakfast, this might not be such a stretch.

Some people do a 4:20 plan, choosing which four hours they want to spend in eating mode. The remaining 20 hours are foodless.

There are those people who eat for fewer than four hours a day and fast the rest of the time, but in my opinion, that’s a bit extreme. I’ll tell you why in a minute.

Fasting is not always for hours; sometimes it’s for days:

Some people do a 5:2 plan, which is what I did in my previous review. This is when you eat ‘normally’ for five days a week, then for two non-consecutive days you eat 500 calories or less.

The Fasting Mimicking Diet, created by Italian researcher Dr. Valter Longo (I reviewed it here), is a branded IF diet that’s done for 5 days a month. Each day contains between 700 and 1000 calories of mostly fat, and is plant-based.  Honestly, I don’t think you need to pay money to do IF, but that’s just me. 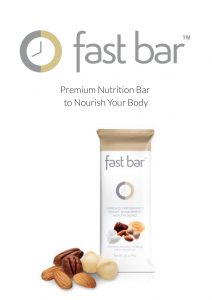 The Fasting Mimicking Diet has a line of bars that are essentially just nuts and fat. They claim that you can eat these while you fast, but isn’t the point of fasting, NOT EATING?

In terms of disease prevention, fasting supporters claim that fasting helps your cells repair themselves, which is called autophagy, and reduces inflammation. Autophagy occurs as a response to stress, and this may lead to a lowered risk of some diseases such as diabetes, cancer, and neurodegenerative disorders, among others.

In a small 2016 study, a group of obese men who used IF experienced greater insulin sensitivity (although they did not lose any weight)

A 2017 human study looking at fasting and disease risk did find that participants who were in the fasting group lost weight and decreased their levels of IGF-1, which is implicated in the risk of diseases and in aging. They also had lowered levels of C-reactive protein, which is an indicator of inflammation.  So those are all good things.

This study was only three months long though, and 25% of the fasting group dropped out before the end, versus 10% of the control group. IF is tough for a lot of people to maintain…even for three months.

A small 4 month study done by the developers of the Fasting Mimicking Diet found greater weight loss with an IF group than with a continuous low calorie diet group, which isn’t consistent with other published research between the two diets.

However, 40-50% of participants dropped out before the end of this study.

This 2020 review article in the NEJM suggests that the benefits of IF aren’t due to weight loss, but instead, are due to ketone bodies, I need to see more research to fully assess this assertion, but that being said, this hypothesis was based on an 18:6 configuration.

For weight control, IF works for some people, and not for others. It’s not a guaranteed method by any stretch of the imagination, and again: it’s simply another method by which to cut calories.

Which brings me to…

The Downsides of Intermittent Fasting

I’m just going to come out and say it: intermittent fasting can be tough.

If you’re not eating enough or you’re on a fasting configuration like 5:2, IF can affect your energy levels and your workouts.

Most of all, intermittent fasting can be seriously disruptive to your emotional and social wellbeing if you’re constantly planning social events around your eating hours or, not eating at events that are in your ‘off’ time.

Those situations aren’t fun and can cause serious anxiety for some people. Nobody wants to go out to a late dinner with friends and just drink water. If you’re travelling, or otherwise in a situation where eating would contribute significant joy to your life (I can’t think of many situations where this is NOT the case), you’ll need to be okay with missing out on food.

Think twice about what that is going to feel like and if, in the end, it’s worth the sacrifice.

If you’re eating only a few hours a day – especially 4 hours or fewer, you are more likely to experience all of the stuff I’ve listed above. Not fun, and why would you ever want that?

There’s also the important ‘ignoring of internal cues’ that can affect some people. With IF, you might be hungry at certain times, and if you don’t want to break your fast, you’re going to have to ride the hunger out.

My take on that is that hunger cues – like the cue to pee, for example – exist for a reason. To ignore those natural cues isn’t healthy physically or psychologically. We’re so quick to ignore our hunger cues, and we’d never do that to our pee cues. ‘It’s not time to pee yet, I’m gonna just wait’…can you imagine?

Why is eating so different?

It goes without saying (but I still have to say it) that IF can also be dangerous of insulin-dependent diabetics, the elderly, children (if you put your kids on an IF diet, you should really reconsider your fitness as a parent), or if you are pregnant or breastfeeding.

This is the part of the post where I need to warn you loud and clear: If you have ever had an eating disorder, or disordered eating, or are predisposed to these conditions, DO NOT attempt intermittent fasting in any configuration.

The last thing anyone with an unhealthy relationship with food – or an eating disorder –  needs is to restrict food. Nope.

An RD’s Thoughts on Intermittent Fasting

Intermittent fasting helps some people with weight loss because it’s yet one more way to cut calories.

It also shows promise in terms of improving health markers, but longer-term studies are needed.

While I support IF for those people who find it helpful, there are a lot of instances where I’d caution against it: if you have even a whisper of disordered eating or a history of it, for example, don’t touch IF or dieting with a ten-foot pole.

Some people combine IF with other restrictive diets, such as keto. All I have to say about that is, why? The more diets you’re on, I’d say the less of a chance that you’ll be able to sustain that way of eating for the long-term. It’s not a contest (or at least, it shouldn’t be).

I think that with any weight loss or eating plan, it has to be something sustainable and doable for YOU.

It also has to fit with your lifestyle and your well-being. In other words, not just with what you weigh, but your happiness, contentedness, social life, relationships, finances, food satisfaction, work life, travel, and every other little thing that the ripple effect of a diet touches.