What do you see when you look at the photo below? 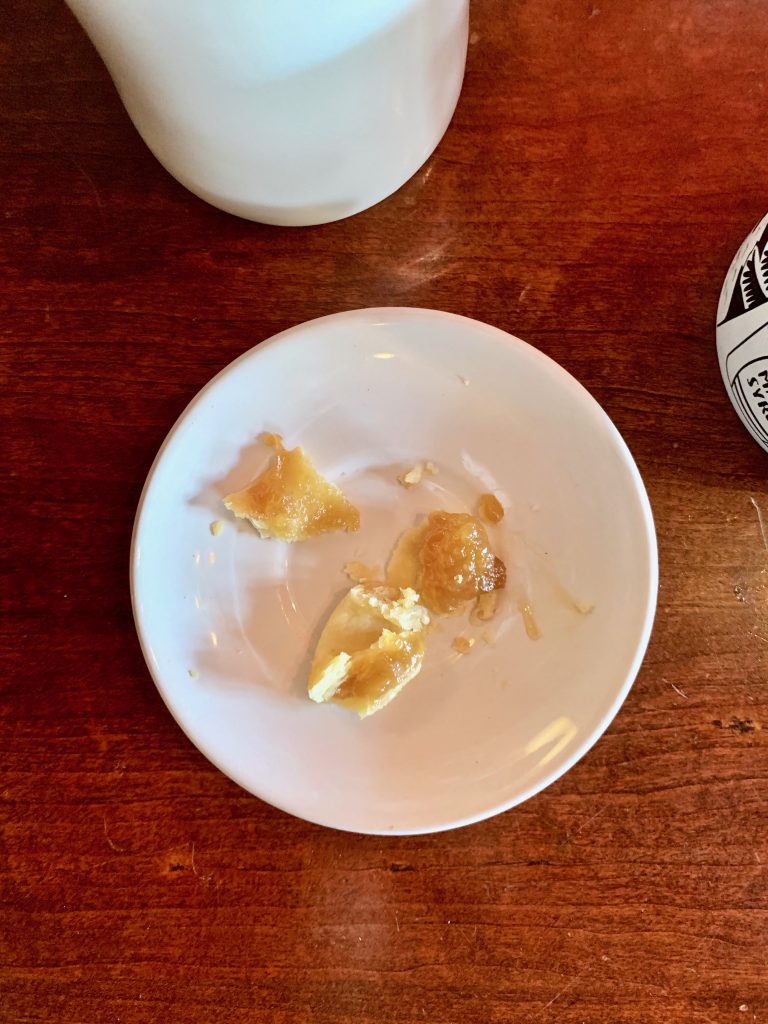 For the record, I took this picture of my unfinished butter tart (for the Americans/uninitiated, butter tarts are a Canadian baked good that are basically gooey pecan pie, with no pecans, in a tart) today in a coffee shop.

Why am I taking pictures of my unfinished food?

Because we need to talk about what this butter tart represents.

If by chance I did end up ordering the butter tart, I would have eaten the entire thing in less than 10 seconds, then gone home and eaten more sweets. My line of thinking with that was always, “I’ve already broken the seal on sweets today, so why the hell not eat more desserts until my stomach hurts? I don’t plan on eating sweets again for as long as I can stand it, so YEAH! Sounds like a plan!”

Yes, I’m a dietitian.  And yes, dietitians have struggles with food and eating too.

Today on my way to the coffee shop, I was craving something sweet. I then started to feel trepidation from years ago sneaking in, telling me that if I ordered something like this butter tart, it would trigger a cascade of eating like it used to. Can you imagine that after all this time, with everything I know about myself and my body,  I’d still have these thoughts?

Totally normal, but we’ll get to that.

What ended up happening is that I got to the coffee shop, chose a butter tart and a tea, and ate what I wanted from the tart. I thoroughly enjoyed it, because butter tarts are delicious (highly recommend you try one if you haven’t).

After I had about half, I wasn’t into it anymore. In the past, I would have eaten the rest just to eat it. Eh. Not today.

Today I went to the coffee shop 100% prepared to eat the entire tart. If I had, I would have enjoyed it and gotten over it pretty quickly.

That’s a far cry from when I was younger and making useless food rules and punishing myself for my eating habits.

I know lots of you are where I used to be. You’re afraid – you actually feel a great deal of fear and anxiety – when you see something you’re conflicted about eating. You want it so badly, but you think it’s going to lead to guilt, shame, and a huge loss of control over what else you eat. You think it’s going to affect your weight and how you feel about yourself.

Those feelings are so shitty. I feel you, because I’ve felt them.

The good news is that although it’s a process, it’s possible to extricate yourself from this place and go on to have a calmer and happier relationship with food and eating.

And so my friends, this half-eaten butter tart is a lesson.

It’s a lesson on the importance of understanding what it is you’re feeling. The trepidation I had today had a couple of old feelings behind it. The first one was the lack of trust in myself that I used to feel on the regular.

In days past, I never gave myself the benefit of the doubt by believing that I could actually eat without either over or under eating. It was always one or the other, sort of like the person who’s either ON a diet, or OFF one. Once I realized that my body would realistically never want to overeat every single day, and that doing it once in a while for whatever reason is normal, I started to relax. When I really thought about it back then, I felt sad that I couldn’t trust myself when I had never really given myself all that much of a chance. Slowly, I started to loosen my grip. Nothing bad happened.

The feeling of trepidation also came from my old impulse to remain in control. A lot of the time when we’re anxious or afraid about what we’re eating, it comes from a place of wanting to control how we look and feel. But like everything in life, those things can’t always be controlled, and the more you try, the more exhausted, frustrated, and unhappy you’re likely to be.

I finally realized that wanting so badly to be in control was creating the opposite effect: I was less in control than ever.

Once I gave up some of that control, I was much happier. To my surprise, nothing bad happened, but something good did: my life wasn’t disrupted all day by thoughts of what I could and couldn’t eat, what I wanted to eat, what I was going to eat, what I had eaten, omg you get the picture.

It’s a lesson that some feelings never really go away, and that’s okay. These old feelings bubble up at times, and you just need to let it ride. It’s good to ask yourself some questions when this happens. Like, what am I feeling? Is what I’m feeling rational, realistic, and true, or am I spinning stories? What happens if I do what I’m afraid of? What happens if I don’t? How are these feelings helping me? How are they hurting me?

It’s a lesson to honor – and not be afraid of – your cravings, but then to move on. I don’t want to tell you how many times I denied myself something I really wanted to eat, only to have the dam break later on and overeat as a result. By the same token, we all overeat sometimes, and that’s completely normal. Even if I would have eaten the entire tart today, dwelling on it and planning how I was going to ‘repent’ for it would not be part of the process like it used to be.

It’s a lesson that feeling bad, guilty, or having an all-or-nothing attitude towards food and eating almost always has an unhappy ending. Many people – as I did –  feel as though guilt and shame around food protects them from overeating or eating unhealthy things, but in reality you gain nothing from it in the end. It’s time wasted that’s better spent living your best life!

It’s a lesson to eat the butter tart and enjoy it.

When you truly allow yourself to see food not only as nourishment, but also as a source of pleasure, fun, and beauty, it’s such a good feeling. Life is too short to ignore the social and emotional costs of restrictive diets and a negative relationship with food and eating. Eat the tart.