Most of you know that I just got back from a spectacular trip to Italy, sponsored by Barilla Canada.

Italy is the best: The food is incredible, the country is beautiful, and the people are super nice. I highly recommend a visit if you ever have the chance…it’s a life-changing experience to see how that country lives…and eats. So different from North America, in a good way.

I had a couple of free days to explore Milan, so naturally I went to fruit and vegetable stands, ate a ton of gelato (and did throughout the trip, too), and devoured some incredible pasta.

For the first few days of the tour, I was in Milan at the Barilla Pasta World Championship with other influencers and media from all over the world, timed perfectly to coincide with World Pasta Day on October 25th. We were all there to cheer on our respective countries’ chefs in the competition. The Canadian Chef, Angela Villata, won the first round with her capellini with smoked mussels and sea urchin (GAHH INCREDIBLE).  She didn’t end up advancing to the final round, but watching her and the other chefs from so many different countries face off against each other was a lot of fun.

After the Championship, Barilla invited a group of us on a food tour of Parma, AKA the home of parmesan cheese, prosciutto, and as it happens, Barilla pasta! I’ve always wanted to see how my family’s favorite pasta is created and packaged in its iconic blue box, and now I had my chance…plus, PROSCIUTTO. ALL OF IT. How could I ever say no to that.

Our first stop on the tour was the massive Barilla factory. After a lunch of pasta (of course), we got to tour the facility – unfortunately, we were forbidden to take any photos inside the plant – and see how 1000 tonnes of Barilla pasta is made every single day. That’s a LOT of pasta, but when you’re the world leader in pasta sales, you can imagine how much pasta that entails.

Some of the interesting things I learned about Barilla and pasta were:

Pietro Barilla started the company as a pasta shop and bakery in 1877, and it’s still a family-run privately-owned business. Pietro’s philosophy (that still stands today) was to give people food that he would give to his own children, and the values of the company are passion, intellectual curiosity, integrity, trust, and courage.

Barilla pasta is made with two ingredients: durum wheat, which is a hard wheat, and water. The company has developed eight varieties of durum wheat, and their wheat is sustainably grown throughout Italy, as well as in France, USA, and Australia. To protect the environment, Barilla has their farmers rotate their crops between durum wheat and tomatoes, and then buys both products from them, so it’s a win-win for everyone (and the planet). Speaking of the environment, Barilla’s pasta packaging is 100% recyclable and made from responsibly managed forests. The company is always looking to reduce its environmental impact throughout its supply chain. Even the pasta that’s not able to be sold gets fed to animals instead of wasted.

Barilla is the largest durum wheat user in the world, using more than 1,400,000 tons a year to produce pasta.

Once the pasta is shaped, it’s dried for between 9 hours (for long pasta) and 6 hours (for short). Lasagna noodles take around 1.5 hours to dry.

Italy is so protective of its pasta that it has a Purity law: this states that pasta must have 12% protein and 12.5% water by law after the drying process.

For those of you who prefer Barilla’s gluten-free pasta (rumored by my friends to be the best on the market), know that the gluten in pasta provides the al dente texture – so gluten-free pasta may not be texturally similar to that which contains gluten. 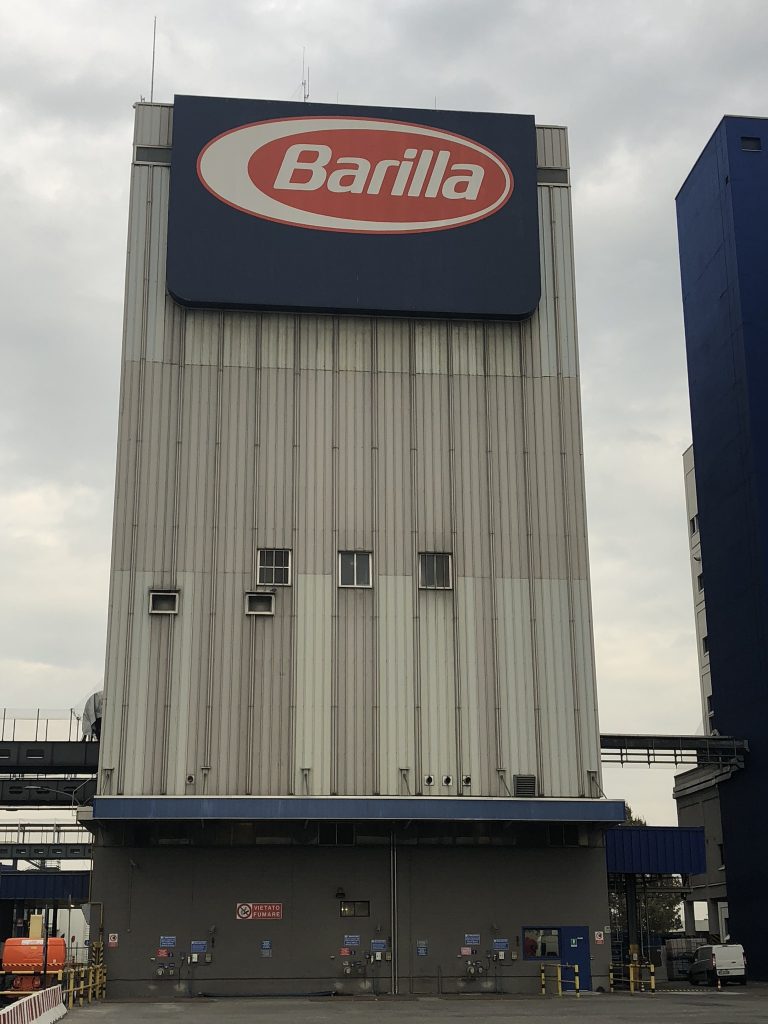 After the Barilla plant, we headed to a Parmigiano Reggiano cheese manufacturer. As someone who can’t eat pasta without a sprinkling of parm, this was the next logical stop on the tour!

Monks in the Middle Ages were the first people to make Parmesan, because they had huge amounts of land and milk cows, and cheese was the only way that they could preserve their milk so it wouldn’t go bad!

A lot of you are probably familiar with Parmesan-type hard cheeses such as grana padano. These cheeses are less expensive than Parmesan, because they’re of lower quality: They  contain preservatives which are forbidden in Parmesan production – the only ingredients in true Parmesan cheese are milk, rennet, and salt – and the milk to make cheeses like grana padano comes from cows fed silage feed, instead of the clover, alfalfa, and pure hay that Parmesan cows eat.

550 litres of milk are needed for one 84-pound wheel of Parmesan, and 9000 wheels are produced per year by the Parmesan cooperative in Parma. The cheese aging room pictured below was stacked, floor to ceiling, with Parmesan wheels.

The cheese is formed, brined, dried, and aged for up to ten years.

Next up was a balsamic vinegar producer!

To make balsamic vinegar, grape juice is reduced for 15-20 hours and then placed into barrels for a minimum of 2 years This is where sugar and alcoholic fermentation occurs until the liquid is 5-7% alcohol.

The vinegar is then transferred to the achetaia, which means ‘vinegar facility’ – where it ages for a minimum of 12 years, up to 25+ years. We got to sample 25 year old balsamic vinegar, and it was syrupy, sweet, and completely delicious.

The aging barrels are made from a variety of different woods, including oak, cherry, acacia, juniper, mulberry, and others – and each will impart a different taste to the finished product. The barrels are always open to breathe, allowing the liquid to evaporate in the summer by as much as 10%. The barrel is then refilled in winter.

Density, colour, smell, and taste are all assessed by a consortium and if approved, the vinegar is sent for bottling. 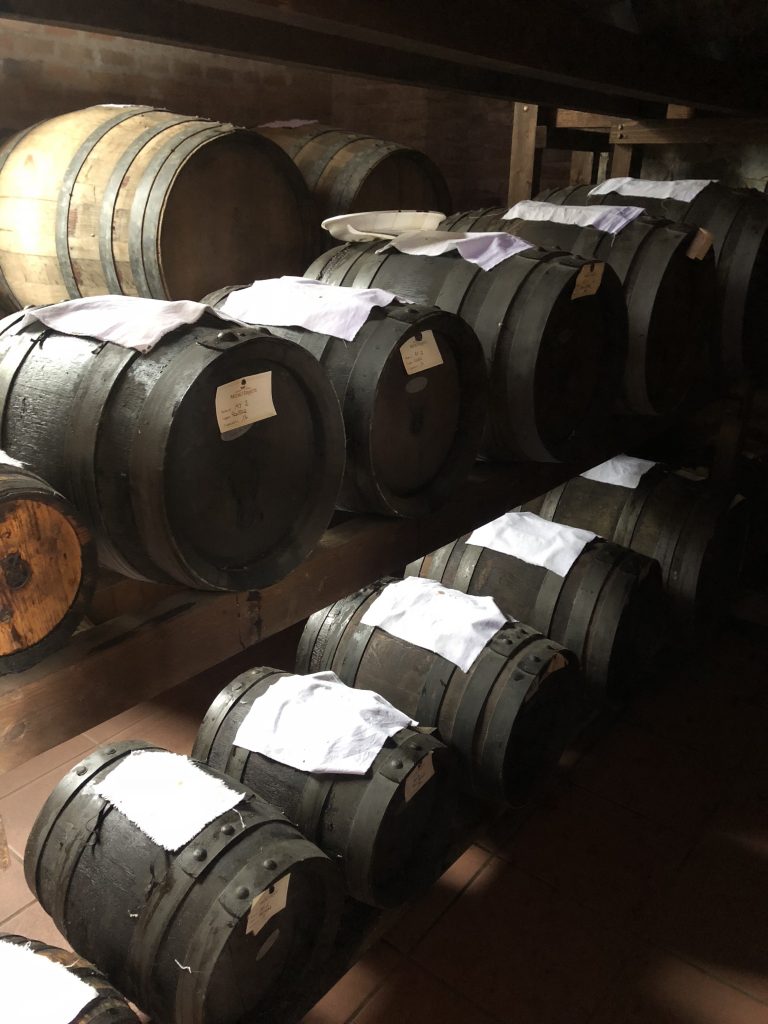 One thing I always notice about Italy is the healthy attitude of Italians towards food and eating, and food as something that brings people together. The country seems to really ‘get’ the concept of ‘eating positive’. People don’t run around eating food on the go; they sit down for leisurely meals (especially lunch and supper – they can run upwards of two hours with four courses). It’s virtually impossible to get a large coffee to go; instead, you’re meant to stand or sit in the shop where you buy it, to enjoy a small cup of high quality brew. Snacks like chips aren’t a regular occurrence in peoples’ diets, and sweets are occasional. Ingredients are mostly fresh and meals are balanced; there doesn’t seem to be the food fear – especially about carbs – that we have in North America. People eat, they enjoy, they’re happy, they know what matters in life. For years, I’ve been using the concept of the Mediterranean diet and Mediterranean attitude towards eating, as an example for clients. Food is meant to be positive, and it’s meant to bring us together. 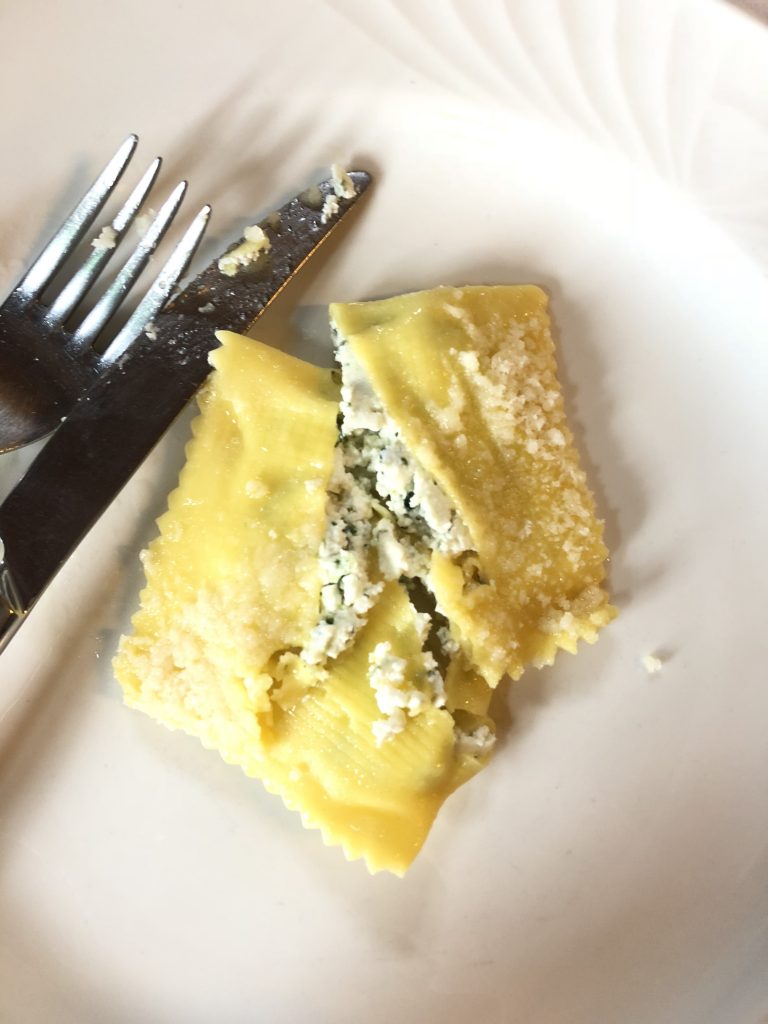