We have a weight problem.

The problem isn’t with what we weigh; rather, it’s with how we talk about weight and our bodies in general.

Kylie, a client of mine, recalled to me a time that she went out to what was supposed to be a fun, relaxing dinner with some of her friends.

“There were eight of us”, she told me. “My friend had brought along an acquaintance who we didn’t know that well, and she kept talking about how much weight she had to lose. All we ended up talking about that entire night was diets, weight, and what we hate about our bodies. It was disturbing.”

I know the feeling, and I’m sure you do, too.

I was recently in Florida with my daughters. There’s this little hamburger stand there that we love; the kind where they cook your burgers to order and you eat them outside at picnic tables. It’s like our little ritual to hit that place up at least once every time we’re in the neighborhood, and that day, my girls and I were in line, waiting to order. In front of us were a mother and her pre-teen daughter.

The daughter asked her mom what she was going to eat. “Mommy needs to be good”, the woman said. “No hamburgers for me today!”.

We’ve all been a participant or a bystander for these conversations, and we need to admit right now that they suck.

Not only are they boring as hell, but they breed discontent with our bodies and, when they occur around kids, are pretty much the worst example ever.

Diet culture is all around us, but that doesn’t mean that we can’t stage a revolt of sorts and change our conversations to something more positive (and interesting). It’s as though being ‘fat’ is the worst fucking thing we could ever be, which intellectually we know is ridiculous.

We need to understand that we are more than the sum of our parts. Why do we feel so compelled to engage in such vapid, useless conversation that does more harm than good?

That in reality, nobody gives a shit about what diet you’re on, or if it’s your ‘cheat day’,  or whether you feel fat after eating a cheeseburger.

That our kids are listening, and that we’re polluting their pure, beautiful minds with our diet garbage.

To be clear, here is my definition of diet culture:

Diet culture is a culture that praises thinness and reviles fatness.

It encourages thin at any cost, and tells us that is a person is fat, they’re somehow lesser than someone who is thin.

Diet culture equates thin with ‘wellness’, even though we know that that’s not the case in many, many instances.

Diet culture oppresses us by making us feel as though we aren’t good enough unless we weigh less.

Here’s how to use your words to give diet culture the finger:

When somebody starts talking about their diet, change the conversation.

Even if that means telling them that their diet talk is boring. Who’s going to argue with that?

Stop using the words ‘good’ and ‘bad’ and other morality-associated terms to describe food and eating.

When you remove labels from what you eat, food becomes nourishment instead of a loaded subject. Remember that with nutrition, there is no such thing as ‘perfection’. Every healthful, nourishing diet (using ‘diet’ as ‘what you eat’, not in a restrictive way) has a variety of foods – even cake.

The same idea goes for ‘cheat days’ – which I don’t agree with (read why here), and using phrases like ‘these clothes hide a multitude of sins’ or ‘these brownies are sinful’ – which imply that you’ve somehow done something wrong. When you tell yourself that you’ve ‘cheated’ or ‘sinned’, it’s a short hop to transfering that idea onto your perception of yourself as a person.

You know you are NOT your diet, and it’s time to stop that thinking in its tracks (even if, as it often is, it’s done subconsciously). Just stop.

Announcing that you need to go on a diet, or standing in front of the mirror pinching the extra fat on your thighs just makes you feel, well, like shit, not to mention anyone who’s watching you. It’s such a downer hearing someone complain about their body, especially if their complaints are meant to elicit sympathy or compliments. It’s like my friend back in high school who used to constantly ask, ‘do I look fat in this?’ when she tried clothes on. Totally fishing.

Hearing your comments about yourself may make other people feel bad about their own bodies. Calling yourself ‘fat’ and using that word as a negative is offensive and insulting. Maybe somebody with the same-sized body is completely comfortable with the way they are, and what do your words say to them about themselves? While we can’t be held responsible for others’ happiness, we should be mindful about how we make other people feel.

If you have nothing good to say, say nothing. But also…

Even if you don’t say it out loud, most of us have a ‘tape’ that we play, consciously or unconsciously, in our heads.

I could write an entire post on our tapes, but needless to say, if you’re constantly telling yourself that you’re not good enough in any way, that can manifest in your mood, your self-confidence, and the way you treat yourself.

It’s completely normal to not always feel good about how you look. But instead of immediately going to the negative, see if you can be neutral about your body. Neutral trumps negative every time. So, instead of thinking, ‘I look so horrible in these pants’, think ‘I don’t feel great about myself today, and that’s okay.’

Pay attention to what you’re saying about your body, even if the remarks seem harmless. When you catch yourself saying something negative, ask yourself if you’d say those things to your kids, or your friends. If not, why would you ever say them to yourself?

Flip those negative thoughts into positive ones.

For example, instead of ‘My stomach is so ugly’, try, ‘This body gave birth to three kids, and has served me well. It deserves some love.’

Or, ‘I really need to try the keto diet’ can change into ‘it’s time to nourish my body properly, so it’s strong and healthy’.

With kids, focus on what your body (and theirs!) can DO, not how it looks. That goes for other peoples’ bodies, too.

Please do NOT criticize other peoples’ appearances in front of your kids. Not only is it gross and ugly, it teaches them that it’s okay to be unnecessarily critical and not empathetic towards others. Plus, commenting on other peoples’ bodies is rude AF.

Other peoples’ bodies are none of anyone else’s business. Unfortunately thanks to the media and disgusting articles like the ‘celebrity post-baby body’ and ‘celebrity bikini shots’ in rags like People Magazine, we’ve gotten the false impression that we’re entitled to give our unsolicited observations on others’ physical appearance.

Teach kids that bodies come in all shapes and sizes, and that’s normal. Unlike diet culture that focuses on how bodies look, turn your focus on the strengths of bodies, not what they look like.

It feels so much better to be positive, instead of being critical and negative. 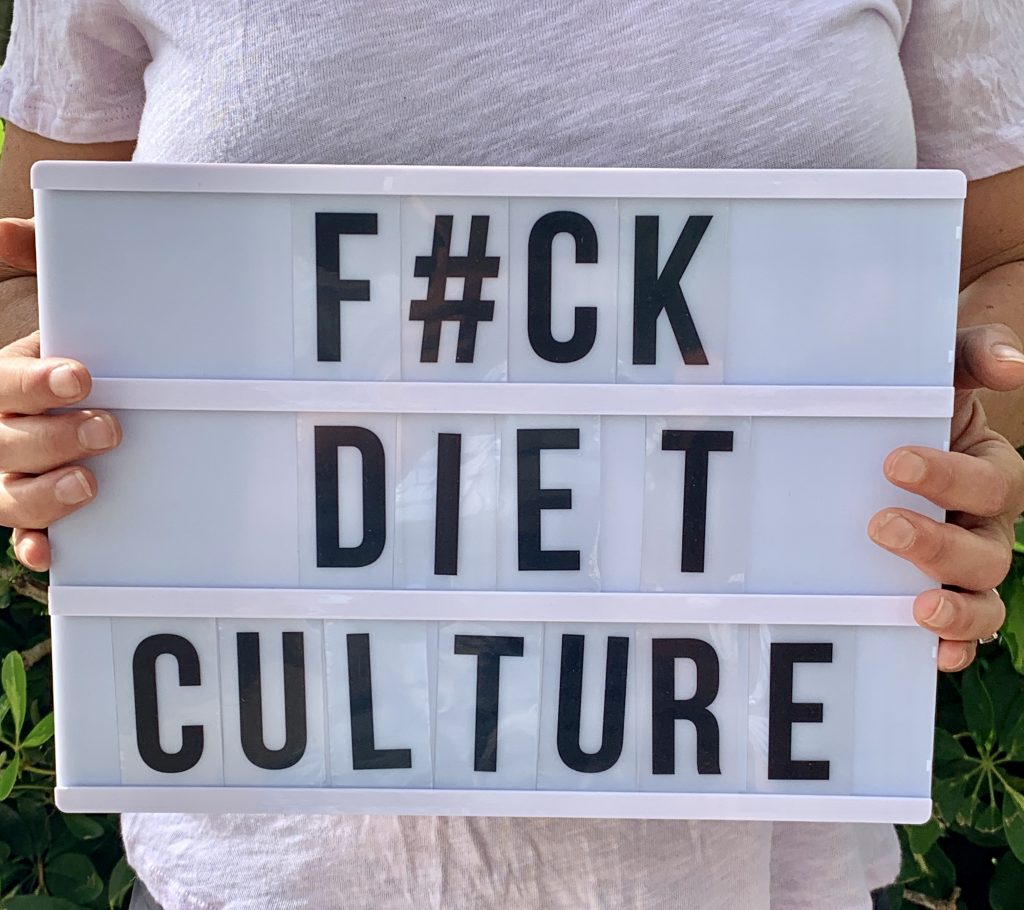