Nutrition myths are my favorite thing to write about, because they’re just so darn entertaining. Whether it’s a crazy diet or fad, or straight-up untruths about eating and food, writing about myths means I get to debunk them for all of you, so you can relax and enjoy food again. Giving you science-based information about why these myths aren’t true can also help you make smart decisions about what to eat. Win-win situation for sure!

Here are some popular myths that are just begging to be crushed. Let me know if you have any other ones you’d like me to tackle!

Vegan doesn’t mean healthy, or that you can overeat

Maybe it’s because most of those high-profile vegan instagrammers make their food look so healthy and delicious, or maybe it’s because the word ‘vegan’ makes people think of ‘vegetables’. All I can tell you is this: a vegan diet can be super-healthy, but automatically labelling every vegan food as ‘good for you’ is not okay. You also can’t eat as much as you want just because something is ‘plant-based’ or ‘whole food’. You still have to watch your portions and honor your hunger and fullness cues. No going crazy on the quinoa!!

French fries are vegan, after all. Not that I have anything against french fries, but you know what I’m getting at. Also watch for food companies using a ‘vegan’ claim on labels to give products a health halo, just like they use ‘organic’ and ‘non-GMO’ for the same purpose. There are plenty of animal product-free foods that are not great choices, because they’re still ultra-refined, or packed with sugar (acai bowls, I’m looking at you). Vegan desserts are still desserts, and two cups of quinoa has far more calories than you think.

Being a balanced vegan takes work (and it’s totally worth it, IMO), which usually means avoiding ultra-processed vegan crap, pre-planning your meals, and prepping food. Please do it the right way.

Turmeric lattes aren’t making you any healthier, and neither are acai bowls or coconut oil brownies

Oh, superfoods. I wonder who invented that lame word? I’m sure their intentions were pure, but too many people using it as a marketing ploy have ruined it for the rest of us.

Putting a ‘superfood’ into anything doesn’t automatically bump up its nutrition. In fact, many superfood-fortified foods are just as shitty for you as their non-superfood fortified counterparts. Take turmeric breakfast cereal, matcha chocolates, chickpea flour chips, and I’m not even going to go there with kale EVERYTHING…STILL! OMG!!! I just saw a broccoli latte in the news, which made me want to retch. We need to stop trying to ‘supercharge’ every single food and just let food be food, am I right? Sometimes, most of the time, eating for pleasure is a good thing.

Lipstick on a pig doesn’t make that pig into a unicorn, and putting goji berries into your smoothie bowl doesn’t make it any healthier or less sugary. Another thing to think about is, many of the benefits of ‘superfoods’ such as turmeric (or curcumin, which is the active ingredient in turmeric) won’t be available if the active ingredient is not present in the correct form or if the amount is too small. And with most superfood-fortified items, there is no way of knowing how much active ingredient is in them. So hey –  put down that green juice margarita and just stop it already.

Never buy a food whose ingredients you can’t pronounce

It’s always a good idea to know what’s in your food, but what if you don’t recognize some ingredients or they’re weird-sounding? Don’t automatically assume they’re scary chemicals that are going to ruin your health. I know some ‘wellness bloggers’ who would like you to share in their chemophobia and pass on any food that contains more than three ingredients that you can understand, but let’s be reasonable. Yes, some food has crappy additives that you don’t really need. Some food, on the other hand, has ingredients that are science-y and strange but are really nothing to worry about.

Some commonly-used ingredients with weird-sounding names are:

Carboxymethylcellulose: a plant-based carbohydrate that’s used as a stabilizer

And just because I think these sorts of things fascinating, here’s a nutrition label for kiwifruit: 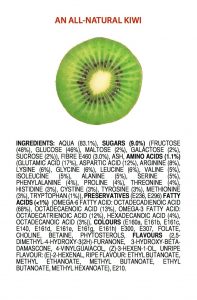 See? None of that is easily pronounced…or particularly scary.

Olive oil becomes carcinogenic when you overheat it

Not really. This myth has been around for a long time, and the first thing I want to say is that if you’re cooking with extra virgin olive oil, just know that that type of olive oil isn’t really for high heat cooking. Because of its delicate flavour, it’s mostly for salad dressings and dishes where you’d eat it cold. It’s also great for short cooking times on medium heat, such as for sautéing. Fried eggs in extra virgin olive oil are amazing!

Light olive oil, on the other hand, has a neutral taste and a higher smoke point, so it’s better for heating. It’s also one of the most stable oils to cook with at high heat (FYI more than canola). Smoke point isn’t a great determination of an oil’s actual heat stability, so don’t think that just because an oil doesn’t smoke at high temps, that it’s not forming harmful compounds. This article by Diet vs Disease is amazing at explaining the whole situation and the latest research. I seriously love this guy.

While exposing extra virgin olive oil to high heat can degrade it and make it smoke, the level of heat and the cooking time you’d ever apply to oil in a home kitchen wouldn’t be adequate to cause any harmful effects; all that’s going to happen is that you’ll ruin the taste and destroy the healthy antioxidants in it.

Repeatedly heating any oil at high heat can form teensy levels of trans fat in it, so if you’re deep frying in oil (and I know all of you do that every single day…just kidding), change out the oil on a regular basis. Done.

Fish oil is great for your heart

The jury is out. Many of us have pushed omega-3 fatty acids for heart health, but a recent meta-analysis suggests that fish oils have no impact on cardiovascular events like heart attacks and strokes. This doesn’t mean that omega-3s don’t have other benefits, such as a suggested role in reducing inflammation. Plus, the dosages in the trials weren’t high – 1.8 grams was the highest dose of EPA in any of them. Could higher doses have a better effect? We aren’t sure. But right now, it’s looking as though the research indicates no real reason to supplement with fish oils specifically for heart health.

I think the basis of this nutrition myth was a belief that our metabolism slows down and needs to constantly be ‘stoked’ to work its best. Except not really(and here).

We’re all different, which is a new concept for nutritional science – the same nutritional science that brought us the one-size-fits-all Food Guide, and said that everyone needs 12 servings of grains and margarine instead of butter. Some people do well with a ‘grazing’-style of eating; others end up gaining weight and feeling irritated with having to eat so often. It just depends on what sort of person you are, but the more frequently you eat – and eating six times a day during average waking hours means that you’re grabbing a smallish meal every 2.6 hours *GULP* from the time you lift your head off the pillow in the morning until the time you get into bed at night.

As far as the metabolism thing, going for a really long time without eating – as in, days – may decrease your metabolism, but more likely, it will just make you feel over hungry and more likely to gorge at your next meal. If you’re not the least bit hungry and you’re not going more than 4-5 hours without eating, there’s really not much of a reason to eat. You do you.